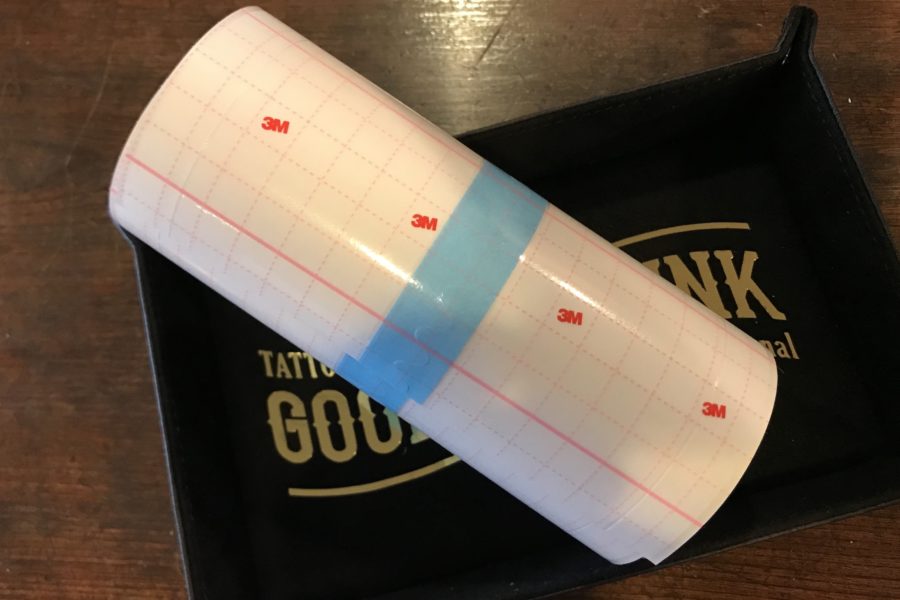 Like most people who got tattooed 10+ years ago, after my previous tattoos, my tattooist would cover my new ink with cling film (or Saran Wrap, or whatever you want to call that clear stuff we all have in our kitchens) and tape it into place. The cling film protected my tattoo from rubbing against my clothes and prevented the fluid and ink still coming out of the fresh tattoo from staining my clothing. With movement, the tape and Saran Wrap tended to bunch up or get unstuck, but I did my best to keep it on the tattoo until bathing that night. Once in the bath or shower, I carefully cleaned the tattoo, applied ointment and hoped the tattoo would heal nicely. I imagine this procedure sounds pretty familiar to people with old tattoos.

Although it is an intentional work of art, your body treats your new tattoo like a wound. It wants to expel all foreign matter and protect the “wounded” area from bacteria and grow new skin.

Obviously, three or four hours is not enough time to complete this process. Like any other scratch or a cut, the tattoo will keep oozing a small amount clear fluid and excess ink for longer than the three or four hours it was under the wrap. As the fluid and ink is exposed to air, a scab begins to form over the tattoo in order to protect it from harmful bacteria. The more fluid and ink comes out of the tattoo, the larger the eventual scab. Some parts of the tattoo will have very thin flakey scabs, but other parts may have a larger scab–and the problem with scabs is that they tend to come off if bumped or scratched. Then another scab forms, and this usually results in uneven ink coverage and loss of ink from the tattoo.

Another problem with exposing fresh tattoos to the elements very early in the healing process is infection. Although my tattoos never got infected, it is a fairly common occurrence. Infected tattoos don’t heal nicely.

Medical barrier film, such as Tegaderm (3M), is becoming an increasingly popular replacement for cling film for protecting new tattoos. A film dressing is a very thin, sterile, breathable, film that adheres to the skin. It protects wounds from damage and provides a barrier against bacteria. It is also flexible, so it moves with the skin.

My experience with film dressing

In the 15 or so years since my last tattoo, Horihide 2, my tattoo artist, has mostly switched to using film dressings. So, this recent tattoo was my first experience with film dressing.

I thought it would be informative to readers, so I documented the healing process with photographs and commentary. (Warning: the images may ruin your appetite. Be thankful I didn’t post the shower video in which I removed the dressing.)

Horihide 2 waited a few minutes after he finished tattooing, then cleaned the fresh tattoo and cut sheets of medical film dressing and applied them over the tattoo.

This is what the tattoo looked like immediately after applying the film. 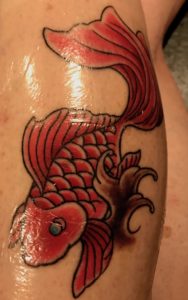 Throughout the night and the next day, my tattoo continued to expel more fluid and excess ink. Black fluid started to accumulate under the film. Horihide 2 told me what to expect, so although it looked pretty nasty, I was not alarmed. This is what it looked like after keeping the film on for 24 hours. 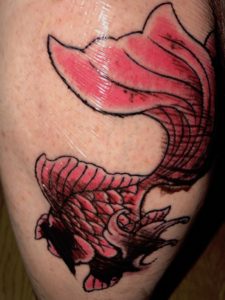 During the second day, slightly more fluid accumulated, but there was no leakage and the film dressing showed no signs of losing its adhesive strength. I should add, that because the dressing is so thin, most of the time, I completely forgot I was wearing a dressing.

Here is what it looked like at the end of day 2. 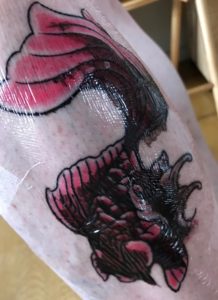 Removing the film dressing from the tattoo

Horihide 2 instructed me to keep the dressing on for 3 days. The appearance of the tattoo did not change much between day 2 and day 3, so I spared you another photo.

I made a fine lather with olive oil soap–I use Aleppo soap. (It’s OK to use whatever soap you usually use on your skin. I then carefully rubbed the lather onto the tattoo.) I rubbed the tattoo gently with the lather until I was able to remove all of the accumulated ink and fluid. This took a few tries. But, when I finished, the tattoo looked almost exactly as it had when it was fresh.

After the shower, I rubbed Oronine (a Japanese brand) ointment into the tattoo. Horihide 2 recommends Kuromai-P (another Japanese brand), but Oronine was all I had at home at the time.

The next day parts of the tattoo had a very thin flakey layer of skin, sort of like what happens after a sunburn. I continued to treat the tattoo with the ointment for two days, then stopped because there was no indication that scabs were forming.

Here is a photo of what the tattoo looked like 2 days after removing the film. 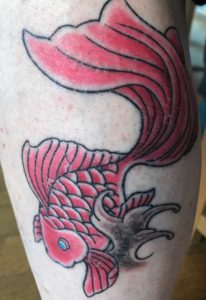 It seems like the film dressing acts like a temporary scab–one that does not suck up ink from the tattoo. The tattoo is able to start the healing process in a relatively sterile environment protected from air and external bacteria. During the three days the film is in place, the tattoo stops secreting fluid and makes significant progress on the road to healing. By the time the tattoo is finally exposed to the elements, it is already mostly healed and does not need to form a larger scab.

Based on my experiences with both cling film (Saran Wrap) and film dressing, I have absolutely no reservations recommending the latter. I did not have to worry about my little goldfish healing perfectly. Rolls of film dressing are not very big, but the film can be cut into whatever shape or size necessary. Big tattoos can be covered with several sheets.

Horihide 2 always tells customers that tattoos are a collaboration between the artist and the customer. The artist creates and tattoos the design and the customer controls the healing process that determines the final quality of the finished tattoo. Film dressings make the customer’s job a lot easier.