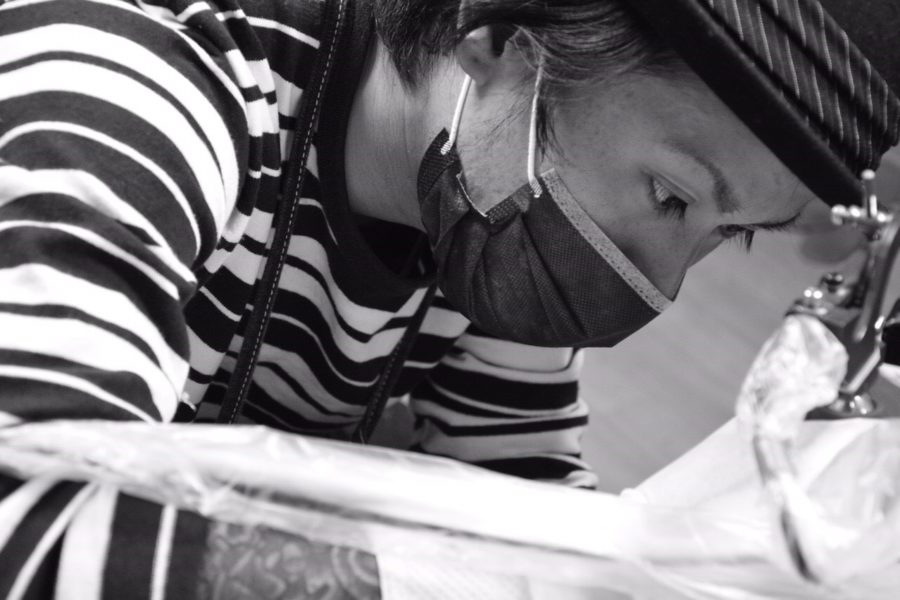 Of the many amazing people in my life to whom I am indebted forever, one of the people near the top of that list is Taiki Masuda. And, it’s not just me. The entire tattooing industry in Japan owes TAIKI a huge debt of gratitude. If it was not for him, tattooing would have become illegal in Japan.

In April, 2015, TAIKI was an artist and tattooist living and working out of a small apartment just north of the city center of Osaka. In addition to tattooing, he painted original artwork on clothing, bags and shoes for a well-known apparel brand as well as creating signs and wall paintings for shops and bars.

Before we delve into TAIKI’s story, let me provide a bit of historical context for the events that unfolded that April.

During the Edo period (1603-1868), tattoos in Japan evolved from a way of branding prisoners into a form of popular art. When the Edo period ended, the Meiji emperor opened Japan’s ports to foreign trade and the outside world. Emerging from centuries of isolation, Japan lagged far behind the industrial West in terms of modernization. In an effort to present a more sophisticated image to the outside world, Japanese adopted western dress and hairstyles. As part of the modernization effort, the government enacted laws against culturally ingrained practices it deemed “uncivilized.”  These included mixed bathing, popular shunga pornographic art and tattoos. The ban on tattoos and tattooing was finally was dropped in 1948, after the end of WWII, when tattooing was finally removed from the list of misdemeanor offenses.

Over the decades following the lifting of the ban, tattoos enjoyed a surge of popularity among the young, and even the not-so-young. Although tattoos still had a negative image for many, they were no longer only for yakuza. Bookshops sold tattoo magazines, and tattoo shops openly advertised their businesses with signs and websites. Tattoo events with live tattooing demonstrations were held in cities throughout Japan.

One such event was scheduled in Osaka during the month of April, 2015. A few days before the scheduled date, the event was cancelled without warning. As the fog of rumor regarding the reason for the cancellation lifted, TAIKI learned that the organized crime unit of the Osaka Prefectural Police had contacted the promoter–a prominent businessman, who also happened to be a member of the yakuza–and told him if the event was not called off, all tattoo artists participating in the event would be arrested. The promoter cancelled the event and took a huge loss.

TAIKI had maintained a blog on Ameblo, a popular blog platform in Japan, for several years. There, he wrote about and posted pictures of his work. The blog had a steady readership and received several thousand page views every month. Right around the time the tattoo event was cancelled, TAIKI noticed an uptick in traffic to his blog.

An increase in blog traffic is usually welcome; however, something seemed a bit off. Until now, bumps in traffic to his blog usually coincided with new blog posts–which was not the case with the sudden increase he was seeing. He also noted the traffic was not from his usual subscribers. And, while most people viewed his blog from their smartphones, the new traffic was from PCs, and came from searches on his name. TAIKI noted these details in passing, then put them out of his mind.

Approximately a week after the increase in traffic shortly after dawn, TAIKI was jarred from a deep sleep by his ringing cell phone and a persistent banging on the front door of his apartment. He got out of bed and went to the door. Through the peephole, he could make out several men wearing suits standing in the hallway outside his door. Not wanting to alarm his neighbors with the racket, TAIKI opened the door and asked the men what they wanted.

One of the men showed a police ID and held out an official-looking document for TAIKI to see. It was a search warrant. TAIKI had no idea what the detectives wanted, but he allowed them inside. Once inside, the men told him he was under investigation for violating the Pharmaceuticals and Medical Devices Law.

TAIKI watched from his perch on a chair in the corner as five detectives ransacked his small two-room apartment. When pressed for details, one of the detectives explained that one of the suppliers from which TAIKI purchased his tattoo supplies online had been raided. Among the things they had confiscated from the supplier was their customer list–the source of TAIKI’s name. The police were specifically interested in a purchase of glutaraldehyde. TAIKI admitted he had purchased the disinfecting agent through the supplier. He explained he used it to disinfect metal tattoo tubes before packing them in sterile packs and putting them in the autoclave. Most tattoo studios used glutaraldehyde, and it was available on the Internet, so he assumed it was perfectly legal.

The detective explained that glutaraldehyde was a classified substance and that it was illegal to buy or sell it through the Internet.

As the detectives continued to search the apartment, TAIKI realized that the actual intention of the raid was not quite what the warrant suggested. If the glutaraldehyde had been the only problem, the police would have simply seized the remaining disinfecting agent and taken a statement to use as evidence against the seller. However, even after TAIKI showed them the glutaraldehyde, the detectives continued to scour his apartment for tattooing equipment and records of TAIKI’s customers.

Then he was informed that he was in violation of the Medical Practitioner’s Act, and that tattooing without a medical license was illegal. To the uninitiated, this seems like a ‘bait and switch,’ however, police in Japan often get whatever warrant they can to justify a raid, and use the raid as an opportunity to collect evidence for a separate offense–the one they actually want to prosecute.

The police confiscated the glutaraldehyde, TAIKI’s laptop, his cell phone, consent forms from clients , and some of his tattooing equipment. Then, they took TAIKI to the police station where they interrogated him over the course of several hours and made him sign a statement.

TAIKI returned home in a daze after the grueling interrogation. There was nothing special about what he had done. Many of his fellow tattooists used glutaraldehyde to disinfect their equipment. Had others been raided, or was his an isolated case? Why him?

With no phone he had no way to find out what was happening in the rest of the tattooing community. The following day, he went to a tattoo studio owned by a friend not too far from his apartment. The steel shutter was down and no one responded to his knocking. TAIKI returned to his apartment. He retraced his steps to his friend’s studio the following day, but the studio remained closed. Unsure of what else to do, he returned the third day. The shutters of the studio were opened, so TAIKI went inside to meet his friend.

There he learned police had raided not only his friend’s studio, but several other studios around Osaka as well. Tattoo artists all around the city were holding their breath wondering who was going to be next.

As the days went by, news trickled in from around Osaka and the rest of the country. Police had raided a number of small tattoo studios. A few weeks later one of the biggest tattoo studios in Osaka was raided, resulting in the arrests of the proprietor and several artists. Unlike TAIKI, several artists and the studio owner were held at the police station for 20 days.

Over the following weeks, TAIKI returned to the police station several times for further interrogations.

At the end of the interrogations, TAIKI was slapped with a 300,000 yen fine for violating the Medical Practitioner’s Act. His offense was tattooing without a medical license–the implication being that only licensed medical doctors were permitted to give tattoos. If TAIKI continued to tattoo, he would be subject to larger fines and possibly imprisonment.

Similar fines were imposed on other artists who had been raided. Tattoo studios around the country–particularly in Osaka–started shuttering their businesses. Web pages and signage disappeared. Tattooing started moving underground.

To TAIKI’s chagrin, he learned that everyone was complying with the orders to pay fines.

Until the raids, tattoos were not specifically dealt with under the law. Paying the fine would be a tacit admission of guilt and create a legal precedent for classifying tattooing as a medical procedure. He could not imagine having to quit tattooing, but he did not want to live as a criminal. Tattooing was the only profession he had ever wanted.

(To be continued in Part 2)