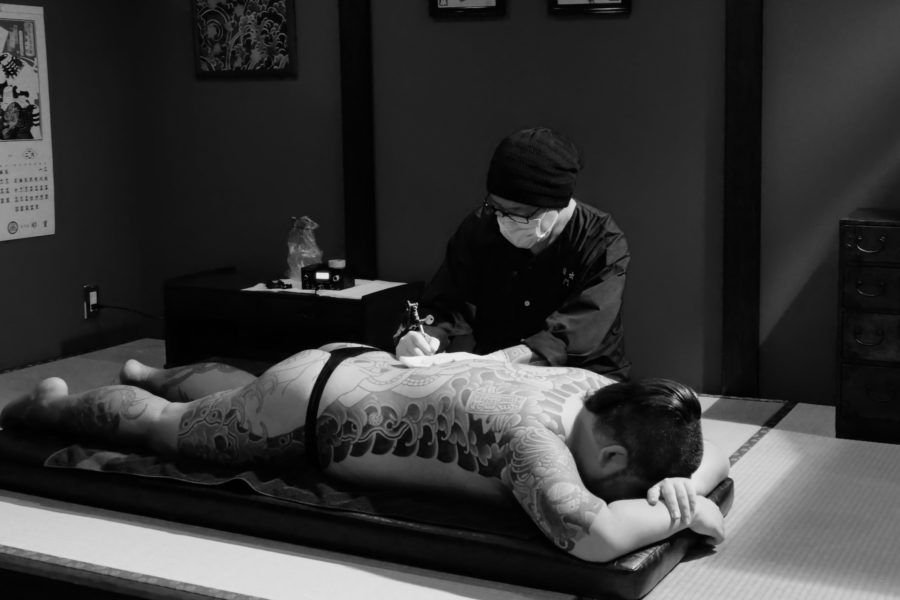 If you are considering getting a tattoo in Japan, you are not alone. The worldwide popularity of Japanese-style tattoos and reputation of Japanese tattoo artists has made Japan one of the top destinations for people wanting to get tattooed. At GOOD TIMES INK, we have a many non-Japanese customers visit us every week. Approximately half of them are foreign expatriates residing in Japan, the rest are short-term visitors from abroad–often coming to Osaka specifically to get a tattoo. Whether you are already living in Japan, or planning a trip in the near future, I’ll try to answer some of the most common questions we encounter. Hopefully, the information contained herein will make your quest for the perfect tattoo in Japan as smooth as possible.

What about tattoos other than Japanese-style?

It may come as a surprise to some that although some of our customers from overseas want Japanese-style tattoos, many want tattoos that have nothing to do with Japan at all. Some people are also surprised to learn that many Japanese tattoo artists do not even do wabori (Japanese-style) tattoos. In fact, some local artists refer customers looking for wabori designs to us because they don’t feel comfortable doing wabori.

We get referrals for non-Japanese style tattoos as well. As I am typing this, Horihide 2 is in the booth next to me tattooing an American Traditional style knife and snake on a customer referred to us by one of the tattooists in his tattoo ichimon (family) who only does wabori-style tattoos.

Just like most other countries, it is possible to find artists in Japan specializing in portraits, American traditional, Chicano, new school, tribal, geometric–and of course wabori styles. Regardless of the style of tattoo you want, you will doubtless have no trouble finding a very talented Japanese artist who can create exactly the design you want. And, you will probably be very impressed with the result. Regardless of the style of tattoo you are after, Japan is a great place to get inked.

What is a “private studio?”

Guests from abroad may be in for a bit of a surprise upon arriving at some tattoo studios in Japan–particularly if they are expecting a western-style tattoo shop. Broadly speaking, there are two kinds of tattoo studios in Japan: private studios and open studios. An “open shop” is a tattoo shop like one would see in the West–a shop with two, three or more artists where anyone can walk in off the street and ask about getting a tattoo. These exist in Japan, but they are a tiny minority.

The majority of tattoo studios in Japan are so-called “private studios.” A private studio is often a separate room in the artist’s residence. Sometimes, it is even the artist’s living or bed room. Other artists rent a separate one-room apartment to use as a studio, but often due to negative sentiments regarding tattooing in Japan, there is no signage at the street level or even the studio name posted anywhere on the building.

The degree of undress required for some tattoos may make women in particular feel uncomfortable being alone in the apartment of someone they don’t know. Although, I have been around this industry for longer than 20 years, I have never heard of anything inappropriate happening, but for the sake of peace of mind, it’s probably a good idea to check out customer reviews on Google or Facebook.

Because open studios often have several artists, it may be easier to find an artist specializing in exactly the style you want. Also, odds are that someone at the studio will speak and understand some English. When choosing an open studio, there are some things you may want to take into consideration. Some open studios just have several beds side by side, offering little or no privacy. Depending on the degree of undress your tattoo requires, you may want to check out what the booths are like the photos on the studio home page.

How safe are Japanese tattoo studios?

Decades ago in Japan, one often heard of people contracting hepatitis from being tattooed with dirty needles, or dirty water used to dilute ink. Such stories are unheard of these days. Most tattoo studios in Japan maintain levels of sanitation and hygiene on par with anything in the West. The tattoo artists I know are fastidious regarding cleanliness. Most studios describe their sterilizing equipment and procedures on their home page. If the artist you want to get a tattoo from does not provide such information on their home page, just ask.

Tattooing does not require the aseptic conditions of surgery, but no one wants to get tattooed in a grimy or messy environment. Photos of the studio should provide a good idea of how clean the environment is.

How much does a tattoo cost in Japan?

Tattoo sizes are generally described as “coin” (a 500 yen coin, about the size of an American quarter), “cigarette pack,” “post card” and “B5 paper size” (approx. 2 postcards).

Coin-size tattoos generally start at about 10,000 to 15,000 yen. Cigarette pack-size tattoos are usually about 30,000 yen and prices increase with the coverage. Some artists charge an extra fee of several thousand yen for needles and equipment. Some also do not include sales tax (8%–to be raised to 10% in October, 2019). This means a 10,000 yen tattoo may actually cost 15,000 yen, so it’s a good idea to ask about extra charges in advance.

Larger tattoos are usually subject to an hourly charge. Prices range from about 10,000 to 15,000 per hour. Bear in mind that although a small tattoo may involve only an hour or so of actual tattooing, it will be subject to the size rates. So, even if a cigarette pack-size tattoo takes an hour or two to finish, the artist will charge the rate for the size, not the hourly rate.

If a tattoo needs to be touched up later, usually there will be no extra charge, but it’s a good idea to check with the artist.

Language barriers can sometimes result in a tattoo that is not exactly what you want. Bring or send the artist the design you want and make sure the artist understands any special requests you have. When describing details, it’s a good idea to draw it out on paper yourself, or to ask the artist to draw it. Be specific regarding placement and size and communicate exactly what you want to the artist. Once the stencil goes on your skin, make sure it is placed exactly as you want. Unlike a finished tattoo, it’s easy to erase a stencil and reposition it. Communicating with the artist or studio by email should provide good idea of whether or not you will have trouble communicating with the artist.

Here again, a perusal of the studio home page is one of the easiest ways to determine if the artist is able to work with you in your language. If they have English on their page, they probably feel capable of working with people who don’t speak Japanese. 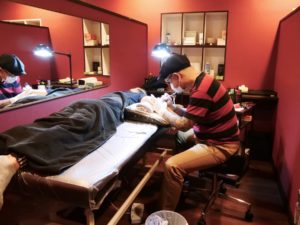 Since this is my blog, I’ll include a shameless plug for GOOD TIMES INK. English is my native language, so if you can read this blog, you won’t have any trouble communicating with me. Our artists are proficient in English to varying degrees. Horihide 2 worked as a tattooist in Australia, so you should have no problem whatsoever communicating with him either.

We are an open studio, so if you reside in Japan, feel free to drop in any time during business hours and check out our shop. We have two private booths so you don’t have to worry about being ogled by other customers when getting a tattoo that requires more privacy.

GOOD TIMES INK is not just a beautiful studio. We pride ourselves on maintaining a world-class standard of hygiene. All of our reusable equipment (grips etc.) is carefully disinfected, packaged, then sterilized in an autoclave. All surfaces that may come in contact with customers’ body fluids are covered with protective coverings. Of course all needles, ink cups and grip tips are disposed of after a single use.

Finally, if you want to get a tattoo at GOOD TIMES INK, we can work out the details of your tattoo and set up an appointment by email–in English, of course. The more information you can provide as far as the kind of design, size and location, the easier it will be for the artist to design the perfect tattoo for you.