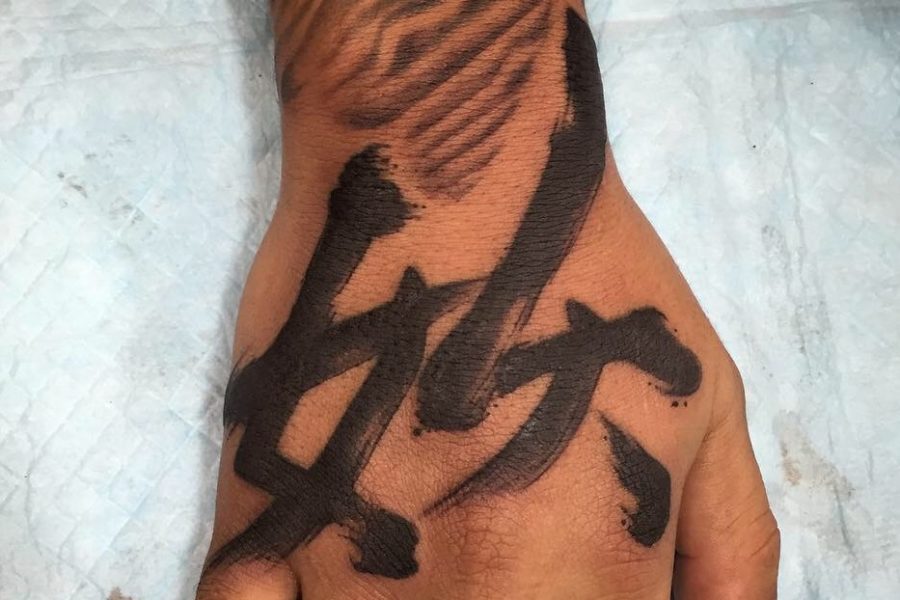 Japan is renowned throughout the world for intricate wabori (Japanese-style tattoo) sleeves, back pieces and body suits.

Although many visitors to Japan would love to get an authentic wabori tattoo in Japan, spending weeks or months in Japan required to complete the tattoo is logistically impossible for most.

This is the first in a series of blogs suggesting alternatives to wabori designs for visitors to Japan who want an authentic Japanese tattoo, but only have time for a single visit.

The first type of tattoo I will cover in this series is the very popular kanji, or Japanese character, tattoo. Foreign writing is exotic and can make great looking tattoos. Although it is common to see Japanese with tattoos in English, French and even Arabic, Japanese get kanji tattoos as well. The the owner of the tattoo by Horihide 2 in the photo at the top of this blog is a Japanese tattoo artist who wanted the character 妖 (yo) for yokai (creatures from Japanese ghost stories) tattooed on his hand.

Japanese has three alphabets: hiragana, katakana and kanji. The first two are different styles of writing the same phonetic alphabet. Unlike phonetic alphabets, individual kanji have meanings. Even a single character can convey something that may require one or more words in English.

The word kanji （漢字）means “Chinese character.” As the name suggests, most kanji are originally from China and often have the same meanings as their Chinese counterparts. As part of the Cultural Revolution, China greatly simplified their characters, reducing complex parts of the characters to simple strokes. This leaves Japanese characters unique in their complexity and, in my opinion, visual appeal.

Things to be careful about with kanji tattoos

Getting the kanji right

There are two things to be careful about when getting a kanji tattoo. Kanji consist of a number of strokes, with every stroke being critically important to the meaning. The absence or presence of a stroke, or even its position or angle can render the character meaningless or even take on a completely different meaning. Take for example these three similar kanji:

To the untrained eye, they may look almost identical, but they all mean something different. The first means “water,” the second “ice” and the third “forever.” Missing the little tag at the top of the character could turn a “Bob and Sally forever” tattoo into “Bob and Sally ice.” And, this is just one example.

The takeaway here is that it is probably wise to get kanji tattoos from someone with native-level ability in writing kanji. An artist without Japanese reading or writing ability may may not recognize the difference between an important component of the kanji and a meaningless calligrapher’s flourish.

Getting the meaning right

Because kanji have meanings, another important consideration is whether the kanji actually conveys the meaning you have in mind. Japanese words written the same way in English often use very different characters and have completely different meanings. Take for example the word “love.” “Love” is ai (愛) in Japanese, but “love” is only one of the dozens of possible meanings for the word ai. Each of the different meanings uses a different character, which means there are dozens of kanji that can be read “ai,” but only 愛 means love.

This potential for confusion has doubtless led to many “interesting” tattoos. For me, the most memorable such tattoo was on a European man’s back. It was a fierce-looking image of Fujin–one of the famous gods of wind and thunder. Fujin for the god of wind is written as 風神, the characters respectively meaning “wind” and “god.” 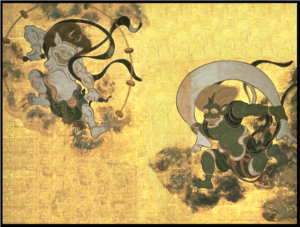 The gods of thunder and wind 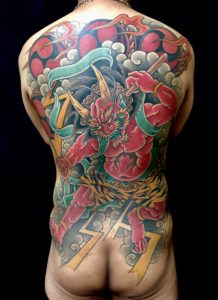 Raijin back piece by Horihide 2

Here is our gallery containing other wabori back pieces by Horihide 2.

Franz Boas, the anthropologist, famously stated that the Eskimo had 50 words for snow. One can encounter similar situations with Japanese. Imagine you want a word that means “strength” for your tattoo. A search for the translation of “strength” on an online translator may turn up characters that mean hardness, intensity, military power or physical stamina. Rather than playing Russian roulette with online translators and risking an unintended meaning, I strongly recommend discussing what you want with someone who understands both English and Japanese.

If you like the idea of getting a kanji tattoo, you may want to consider yojijukugo (四字熟語). Yojijukugo are four-character compound words that are idioms, maxims or aphorisms. One of my favorite yojijukugo is ichigoichie (一期一会), which means “treasure each encounter, because it will never recur,” or “live every day as if it were your last.”

There are thousands of yojijukugo to choose from and many of them would make very interesting tattoos.

Yojijukugo are popular among Japanese, too. When we opened our new studio, a friend gave us this big black Daruma. On the Daruma, he painted three of these yojijukugo, each with a special meaning for Horihide 2 and I and our new studio. 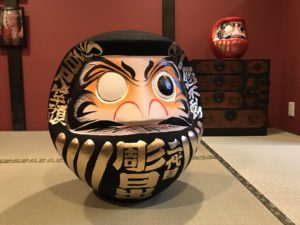 If you are interested in looking for the perfect yojijukugo for a tattoo, here’s a site to get you started on your search:

As with other kanji, when you find something you think is perfect, be sure to check the meaning with someone who understands Japanese before getting it inked.

Getting the writing style can make the difference between a cool and not-so-cool kanji tattoo.

There are an unlimited number of fonts and writing styles for English, and the same holds for kanji. For tattoos, I suggest avoiding computer-generated fonts and choosing something that looks like brush strokes or a bolder rounded font. 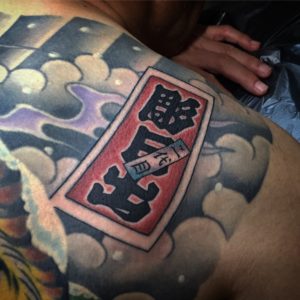 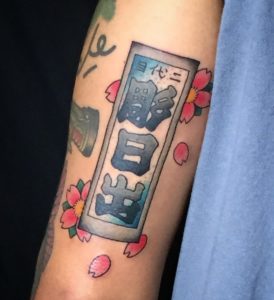 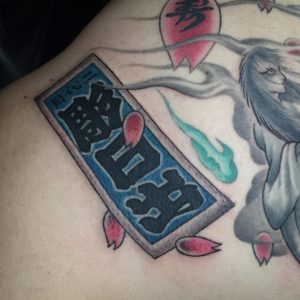 In Japan tattoo artists sign back pieces and body suits with something called a fuda. The above fuda read Nidaime (second generation) Horihide, Horihide 2’s name in Japanese. The writing style is a slightly deconstructed rounded brush style.

When writing Japanese, most people move from one stroke to the next without lifting their brush or pen. This gives the characters a deconstructed “cursive” look. There are many degrees of deconstruction. At the most deconstructed end of the continuum, the kanji are no longer legible–even to Japanese. Here is an example of how the characters that mean “calligraphy” are deconstructed. The far right example will be pretty difficult to read for many people. 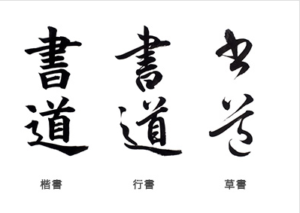 Heavily deconstructed kanji are like a work of art requiring an explanation to be comprehended. For tattoos, most people stick with something a bit easier to read. The examples below show how the character 愛, meaning “love” can be written in different styles. All of these styles are perfectly legible. 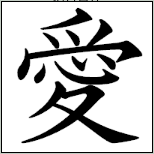 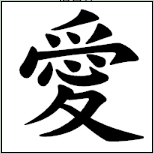 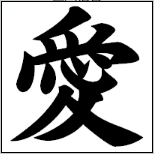 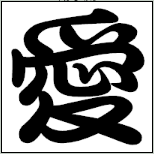 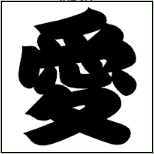 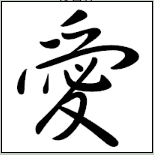 Hopefully, this brief post will familiarize you with the subtleties involved in kanji tattoos. Ink is forever, and it’s important to get something you will be proud of. The difference between a very cool kanji tattoo and one that is embarrassing may be very small, but working with an artist who understands what you want as well as understanding Japanese is the key to getting the perfect kanji tattoo.

At GOOD TIMES INK, we have bilingual (English/Japanese) staff. I’m an American with more than 40 years living in Japan. I speak, read and write both English and Japanese with native proficiency. Our artists are Japanese, with overseas work experience, so together we can help you choose the perfect kanji or combination of kanji for your tattoo.

If possible, please make arrangements for your tattoo in advance. That way we can have designs waiting for you when you arrive. We also try to accommodate walk-ins whenever possible. So, if you are in Osaka please drop in and pay us a visit. We will do our best to work with your schedule.